With its sustainable qualities, steel is the most recycled material on Earth. As a non-combustible material, it provides long-term safety benefits and performs well during earthquakes, hurricanes and other extreme events. With this in mind, it’s no wonder that some of the most famous and durable structures are made from steel. Here’s five of the greatest steel structures from around the globe. 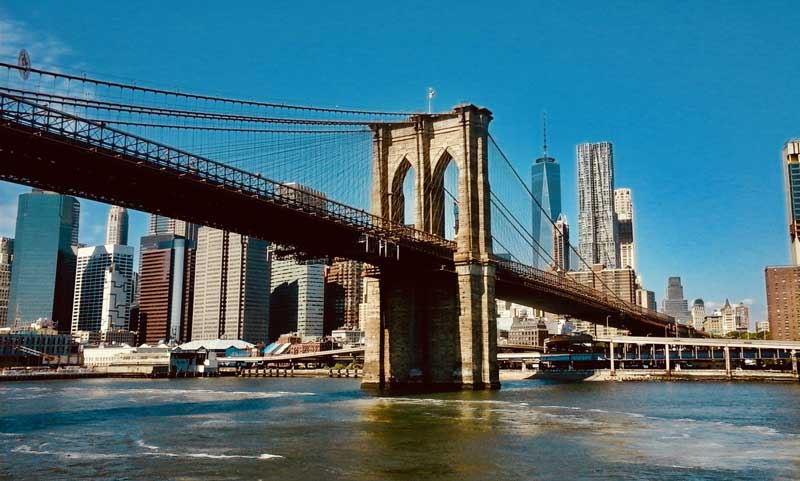 Located in Manhattan, New York City, Brooklyn Bridge is an iconic example of 19th Century engineering. Designed by John Augustus Robeling, (built 1869-83) the suspension bridge has become a key landmark in New York City and considered an outstanding architectural achievement across the world.

Brooklyn Bridge was the very first bridge to use steel for cable wire and during its construction explosives were used in a pneumatic caisson for the first time.

Upon completion the bridge’s 486-metre main span was the longest in the world until the construction of the Firth of Forth cantilever bridge in Scotland in 1890. Since 1883 the steel cables have given safe and scenic passage to millions.

Now at over 125 years old, the suspension bridge still carries roughly 150,000 vehicles and pedestrians every day.

Due to its unique status and heritage, the bridge has been designated a National Historic Landmark by the U.S. National Park Service and is a distinctive feature of the New York Skyline. 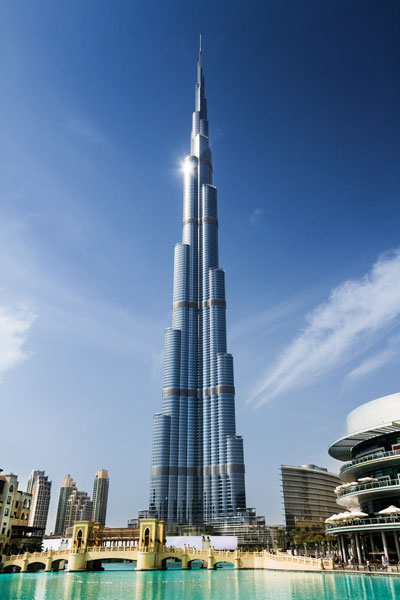 Currently standing as the world’s tallest building, the Burj Khalifa was constructed with 31,400 metric tonnes of steel. Situated in downtown Dubai the luxurious skyscraper is over half a mile high.

Constructed in 2010 the Burj Khalifa has 163 floors and is home to the elevator with the longest travel distance in the world.

Designed by Skidmore, Owings & Merrill, the skyscraper is host to a variety of commercial, residential and hospitality ventures including a 5-star hotel owned and designed by Georgio Armarni.

The steel masterpiece is also Dubai’s most visited tourist attraction with 1.87 million visitors ascending to the observation deck on the 124th floor this year alone. 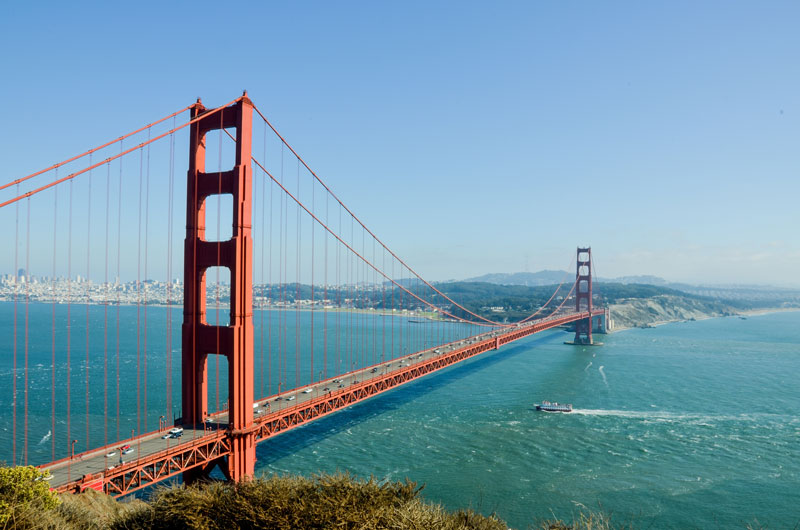 Spanning the one-mile-wide straight connecting San Francisco Bay and the Pacific Ocean, the Golden Gate Bridge was named as one of the seven wonders of the modern world.

Upon completion in 1937, it was the tallest and longest suspension bridge in the world. With its tremendous 746-foot-tall towers and sweeping main cables, the Golden Gate Bridge became a symbol of the power and progress of the United States, and it set a precedent for suspension-bridge design around the world.

Each year The Golden Gate Bridge welcomes over ten million visitors to take in its signature International Orange colour and Art Deco styling.

The 1.7-mile-long bridge has endured earthquakes and held record crowds since its historic construction, including becoming flooded by 300,000 people in 1987 as they took the rare opportunity to cross the bridge on foot for its 50th Birthday celebration.

Designed by Joseph Strauss, Charles Ellis, and Leon Solomon Moisseiff the bridge took four years to build and is considered a modern marvel of engineering. 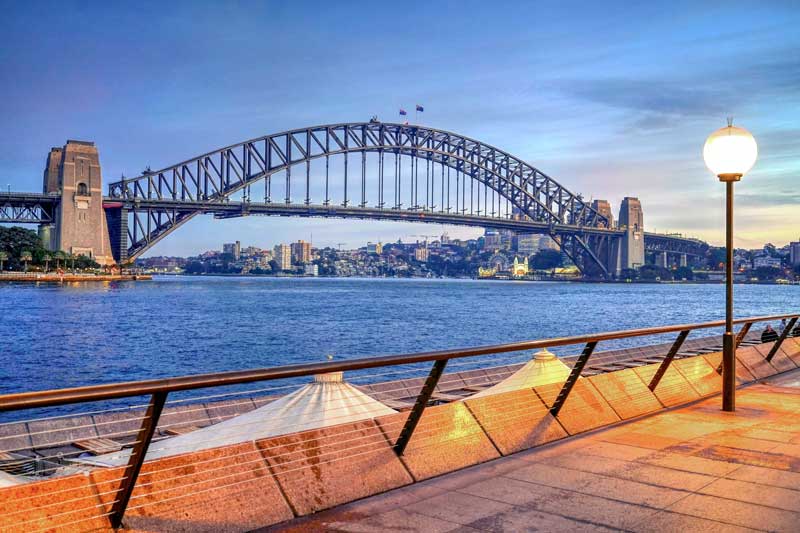 Spanning one of the globe’s finest natural harbours, The Sydney Harbour Bridge is the largest steel arch bridge on the planet.
Designed and built by British firm Dorman Long, the bridge was completed in 1932 and spans 1,149 metres in length.

The construction of the arch was a colossal effort, requiring the skills of 1400 workers, 53,000 tonnes of steel and over 6 million hand-driven rivets to put the bridge together with 80% of its impressive steel structure made from British steel.

The bridge’s main function was to serve as the primary transport link between Sydney and suburbs on the northern side of the harbour. However, in recent years, tourists flock to the bridge for the popular bucket list activity- the Sydney Bridge climb.

Since its opening in 1998, over 4 million tourists have explored the bridge with Bridge climb Sydney for an iconic climb across the steel arches. 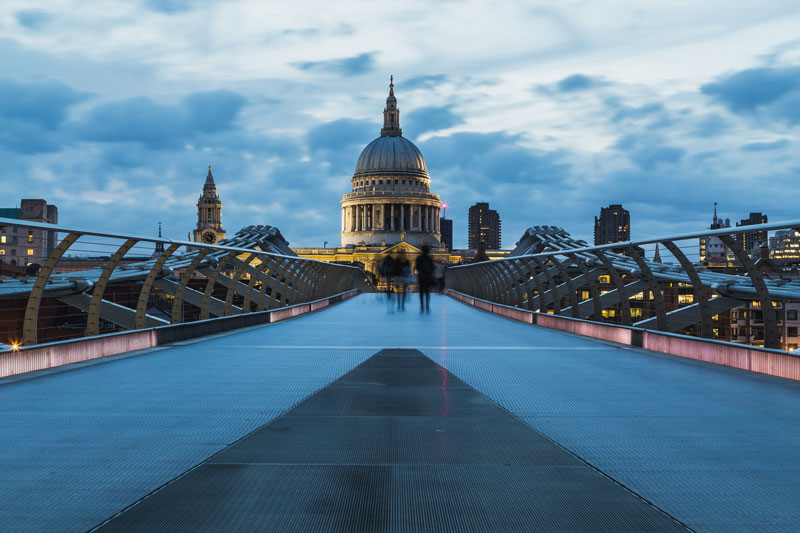 The Millennium Bridge, officially known as the London Millennium Footbridge was the first new bridge to be built over the Thames in over 100 years.

Designed by Norman Foster and completed in June 2000 the steel suspension bridge allows pedestrians to cross the River Thames from Bankside to the city.

The bridge has two river piers and is made of three main sections of 81 metres, 144 metres and 108 metres (north to south) with a total structure length of 325 metres.

Nicknamed the ‘wobbly bridge’ the steel structure, built using lateral suspension was hit by a phenomenon called Synchronous Lateral Excitation. When around 80,000 people crossed the bridge on its first day, with up to 2,000 people crossing at one time, pedestrians felt the bridge sway.

Although there was no chance of it collapsing engineers felt it best to fix the wobble and the problem was solved with viscous and tuned mass dampers.

Millennium Bridge is one of London’s most iconic bridges and its fictional destruction features in the Harry Potter film series, the most expensive scene in the entire eight-movie franchise.

As we can see, steel’s properties of strength, low weight, durability, and resistance to corrosion have enabled architects and engineers to design and construct such huge projects for over 150 years. Having stood the test of time despite extensive public use every day, they not only demonstrate the practicality of steel in construction, but also its adaptability to be built into such distinctive and beautiful structures that are recognised the world over.